This compact air purifier from award-winning HoMedics is an innovative device with a fundamental three stage filtration process that removes 99% of airborne pollutants. It is designed for use in larger rooms and has the ability to remove airborne particles and microscopic contaminants.

The nano-coil technology makes the HoMedics air purifier the most efficient when it comes to eliminating a wide spectrum of various allergens. This elite system has a surface area that is seven times more operational and effective than comparable HEPA filters. All these properties make the HoMedics a winning choice for people suffering from asthma. 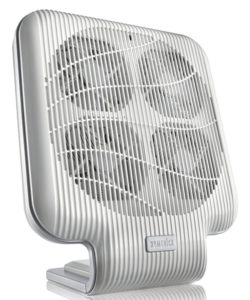 What Are You Buying?

The Homedics air purifier is an eye-catching ultra-portable air purifier with a powerful three-stage filtration system in one device. It is thinner and lighter than other versions it competes with. It measures 15 by 30 by 45 cm and weighs a mere 3.5 kg making it a natural fit for the table or the floor. Beyond the sorts, its skin is white and it harbours a stylish make which satisfies its exclusive contrast on the smooth plastic.

As far as filtration is concerned, Homedics has gone far and beyond offering three refined filters: a nano coil filter, a carbon filter and a pre-filter. The Nano coil filter eliminates up to 99% of airborne allergies and bacteria including flu viruses; the carbon filter gets rid of inhouse toxins and fumes such as smoke while the pre-filter captures large allergy-causing particles such as pollen, dust mites and pet dander.

Complementing the filters is an on/off button, an auto-off timer, a remote control, a filter life indicator and a dial for four different speed settings such as turbo and quiet.

How Easy Is It To Use?

Functionality is where this device excels. Its control panel looks like it belongs to the top tier and is well lit by an LED (although this may be annoying for some people during night).

It is easy to set up including an optional charcoal filter. The handset is self explanatory with an on/off button, speed and time settings.

With respect to filter cleaning, the Nano coil filter is washable, and should be cleaned once a month. However, if you are going to use the purifier on a regular basis, you need to clean it more frequently. The filter indicator basically lets you know when to clean the filter. It is also recommended that you replace it after 18 months to allow for efficiency.

Accompanying the superb features is its incredible energy efficiency at only 25 watts under normal usage settings. With power consumption so negligible, you will be able to run it for extended periods of time.

What Accessories Are Included?

When you finally open the package of the Homedics air purifier, you will find the following.

Anything Else You Should Know?

Apparently, the HoMedics air purifier can capture particles as small as 0.5 microns in size. This enables it to purify the air by eliminating airborne particles such as pet allergens, smoke, dust specks, pollen and mould as well as microscopic bacteria and flu viruses. I have also found that it helps clean air when it is affected by damp and/or rain.

If you are looking for an efficient portable air purifier with impressive performance, you need to consider the HoMedics air purifier incorporated with its Nano Coil filtration technology. From its three-stage filtration process, high Clean Air Delivery Rate to its low energy consumption, the Homedics air purifier is definitely a steal. Its first class air purification will make your indoor air safe and breathable for a more sanitary and healthy environment.

In brief, it is a great bargain for consumers looking for an all-inclusive air purifier. Flood your lungs with fresh, clean and healthy air from this unconventional air purifying system. It is worth every penny.

The Homedics is the epitome of extraordinary performance and handiness. It is a reliable option if you are looking for an air purifier with robust performance and long shelf life.