The newer, greener CS12AE Honeywell Air Cooler is without a doubt one of the most stylish and versatile air conditioning units on the block. But is this enough to make it worth spending your hard earned money on, or does the functionality end there?

As usual, I’ve gone and done the hard yards for you, so you know exactly what you’re getting from the start. Here’s what I found out about this new model from Honeywell. 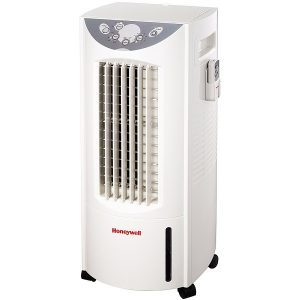 What Are You Buying?

The Honeywell Air Cooler model CS12AE is, in fact, one stylish piece of technology with an unmistakable beige and silver exterior. The vent runs along the length of the unit for optimum cooling.

Boasting of a powerful airflow of 460M/hr or 270CFM, the CS12AE feels right at home in any small to medium spaced rooms, bedrooms, offices, hotels, and garages. However, rooms larger than 130 sq feet may have to wait for a few more minutes to get their rooms to the desired temperatures.

If you’re new to the Honeywell brand, allow me to educate you. They are well known for producing coolers that don’t require power hungry parts and components like compressors. Well, the Honeywell CS12AE Air Cooler is no different from its predecessors.

The cooler has absolutely no compressors; this means that it’s not only easy to use, but also makes the CS12AE one of the most energy efficient coolers in the indoor category. If you’re big on saving a little cash here and there, then the super low consumption of 60 Watts must be music to your ears.

Another feature that deserves mention is the medium sized 12-litre water tank that allows a cooling effect for up to 8 hours. But I’m going to go ahead and also tell you that even at the lowest setting, I don’t see how the CS12AE can make it to 7 hours, although the summers in the UK aren’t usually too hot. But all in all, it makes a decent attempt.

How Easy Is It To Use?

The fact that the CS12AE Honeywell Air Cooler uses evaporate mechanisms makes it one of the easiest coolers to use. Before we even get to the semi-friendly control panel (more on the semi part later), let’s talk about the not so heavy lifting.

All users have to do is detach the 12-liter water tank, fill it up with water, chuck some ice at the top loading compartment and watch the magic happen for a while. Depending on the setting you have on, the cooler should work for between half an hour to just under 7 hours.

There are four setting for the speed; high, med, low and sleep. But I was really impressed with the fact that I could adjust the settings for multiple intervals of cooling. But as I said, don’t expect anything more than just a couple of hours if you’re planning to beat this UK heat.

Honeywell also lived up to their name and included honeycomb pads to boost the cooling efficiency. I just wished that they would have put the same enthusiasm in the portability of the unit.

Sure, the CS12AE has caster wheels, but their flimsy state makes me question how long they will last. And the fact that the unit incorporates some handles does not make it any lighter at 8Kg. However, if you can get it just at the right position and not worry about moving it too much, the remote control will do all the heavy lifting for you.

What Accessories Are Included?

Once you make a purchase, you should find the following items in the box:

Anything Else You Should Know?

Unlike humidifiers, diffusers and other self-sufficient units that do not require secondary ventilation, evaporate coolers will oblige you to open a window or two. That’s because cool water vapour requires a constant flow of air to work effectively and provide a cooling effect for longer.

Low power consumption, fair levels of portability, impressive cooling capabilities and not too bad on the eyes too. If you’re looking for something affordable and functional for your bedroom, office or smaller living room, (and don’t mind leaving a window or two open), then the Honeywell CS12AE Evaporative Air Cooler is your new best friend. If you have a larger room, you could also pair the CS12AE with a fan, and you’re all set.

The newer, greener CS12AE Honeywell Air Cooler is without a doubt one of the most stylish and versatile evaporate on the block. Boasting of a powerful airflow of 460M/hr or 270CFM, the CS12AE feels right at home in any small to medium spaced rooms, bedrooms, offices, hotels, and garages.